Somehow we are already two weeks into December, the year 2021 is nearly over, and our State Office year is beginning to transition yet again. It seems like just last week we were at Oregon District Officer Training in Corvallis, chicken fighting with District Officers in the pool at our hotel. It seems like just a few days ago we were hanging out with members of the Dayton and Yamhill-Carlton FFA Chapters at the Oregon State Fair. The past 2+ months of leadership tour have flown by in what seems like hours, not to mention the week spent in Indianapolis at the 94th National Convention. So much has happened in the last 8 months. Memories stored, relationships forged, connections made. As our team transitions into State Convention planning mode, there are a few moments I would like to share with you that demonstrate what our organization is all about.

At the Lower Willamette District Leadership camp in September, our State Officer Team and a group of FFA Members decided we were going to jump into a freezing cold creek at 6 a.m. About 15 of us gathered at the camp bell tower at 5:50 a.m., made our way to the creek at Camp Yamhill, and on the count of three dove into the ice cold water. It was easily one of the coldest mornings of my life, but was a memory that I will never forget. The brief moments of pain as we pushed ourselves out of our comfort zones was shared between all of us all and was quite powerful. At the end of camp, nearly all of the Vice President’s pledged to keep the polar bear plunge tradition going as they came back to camp in future years. This memory and others like it remind me that while the big moments are cool, the small ones can have just as much of an impact if not more.

National Convention was a legendary week for Oregon FFA. We had multiple teams and individuals place in CDE’s and LDE’s, watched our own Josiah Cruikshank get elected to serve as the National Western Region Vice President, and made memories that many of us will hold close for many years to come. The moment that stood out the most to me was when we took our state photo inside of the convention center. For 30 minutes Oregon FFA basically took over an entire room, and filled a whole section of bleachers for a photo, which is pretty spectacular on its own but the best part was the people who were present. In what felt kind of like State Conventions of old, members from all across our home state that our state officer team had met and interacted with over the past 6 months were all in one place, 2000 miles away from home having the time of their lives. It was truly touching to meet with everyone in one place for the first time in nearly 2 years.

Leadership tour has been incredible, waking up in a new place nearly every day, going into a different classroom and meeting new people. One of my favorite days of leadership tour was spent without a teammate, at the Prospect FFA Chapter. The students at Prospect High School are Rockstar’s to say the least. In an 8th grade class students were jumping up and down to share ideas they had for SAE’s, and chomping at the bit to make their way into Mrs. Wolfe’s class as soon as they could. In a leadership class, students were literally picking each other up and letting their classmates crawl over the top of them to get everyone across an obstacle course. In just hour time periods, I saw numerous students open their minds to something new and grow. It was an incredible and inspiring day to say the least.

These are just a few stories from some of the best months of my life. I am beyond grateful for each and every one of Oregon FFA’s members, their ag teachers, and the FFA community as a whole. As we slightly shift our focus for the rest of the year I cannot wait to have more experiences like these as we finish up Leadership Tour, and work to make the 94th Oregon FFA State Convention the comeback story we have all been waiting for. To all, have a Merry Christmas and a Happy New Year.

With the Utmost Amount of Gratitude, 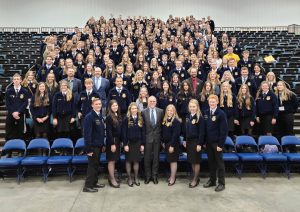