It finally came down to this. As I walked into that holding room, all the memories of the good and bad days of studying, practicing, reciting speeches over and over until that was all I knew, I finally realized that it wasn’t about just trying to get elected but also the friendships I made with all of the other candidates. After a long 3 days of making memories, laughing at each other’s corny jokes, and freaking out when we were all about to open those letters, I was so humbled to be in the top ten. This is when the real stomach in your throat moment happens…

Bright lights. Heart pounding. Nervous sweats. The time had come and my name was called alongside nine other phenomenal individuals where we were slated from president to at-large. There was this thing though, not all of us could be elected. Each and every one of us had put countless hours towards getting to this moment; preparing speeches, going over interview questions, and overcoming hours upon hours of self doubt. In the end those hours helped prepare me all for that moment no matter the outcome.

Eventually I found myself in that holding room as the newly elected president. As I sat in that room waiting for my 5 new teammates to walk in, I found myself in a fever dream. “Is this real?” “Did this actually just happen?”. These questions were pondering in my head while I was alone. As I sat on a chair in an empty room I realized that my life was going to change not only for the next year but for the rest of my life as well. The skills that I learned from going through that process are forever imprinted on me and I will never forget all of the knowledge I gained as well the people who were always a light in my life no matter how dark of a hole I was in.

I am so excited to serve you all this year on the state officer team. One of the many things that I have learned over the years is no matter how much contests are going to change or the people we see come and go, such as time on a clock, but the moments we feel when wearing the blue corduroy always stays the same. 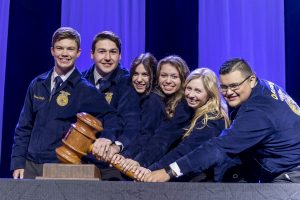